It’s a “speaking clock,” an automated electronic announcement which provides the current time. The distinctive voice belongs to Pat Simmons, a former London Telephone Exchange employee who spoke the time from 1963 until 1985. Simmons followed Jane Cain [↓], the “golden voice” of the first British telephone time system starting in 1936. 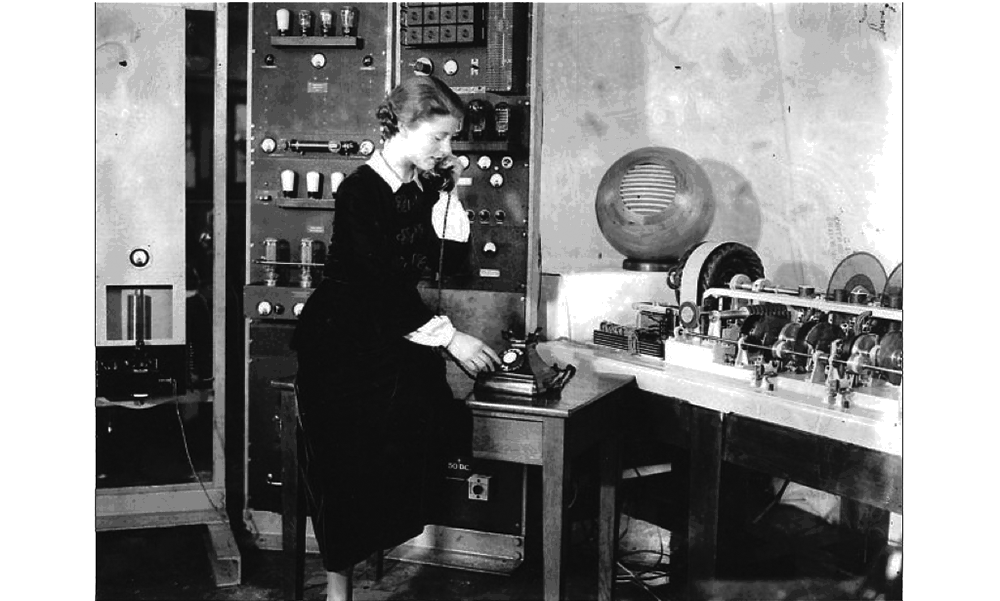 That first set up was a room-sized electric mechanism which produced an automated announcement from glass disk recordings of spoken audio bits. Here is Pat Simmons [↓] recording numbers and sentence fragments. 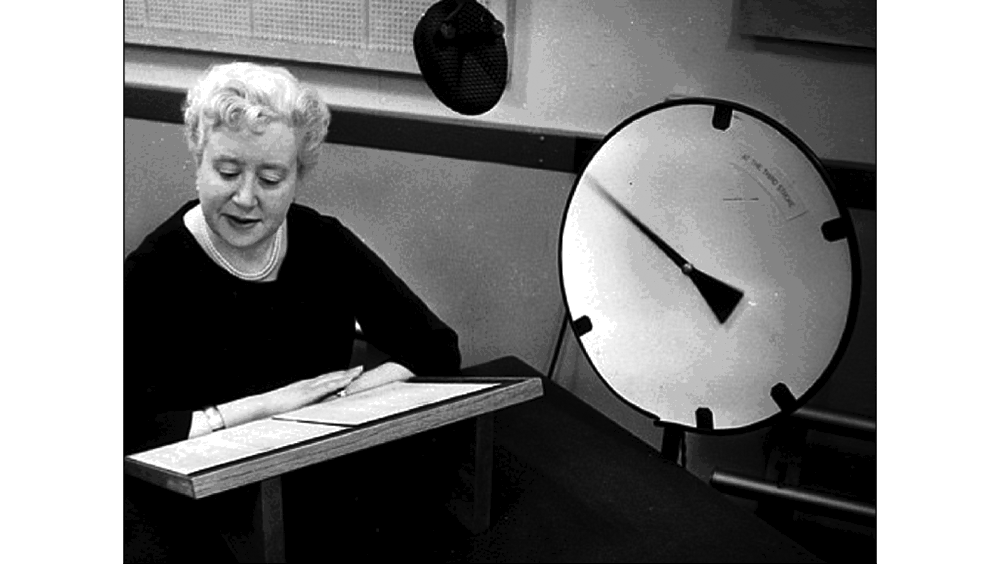 Dialing “T-I-M” from any UK telephone at the time set this elaborate machine running. Before this, speaking clocks were delivered live by an operator sitting in front of a clock face, answering phone calls, and reading out the time [↓]. 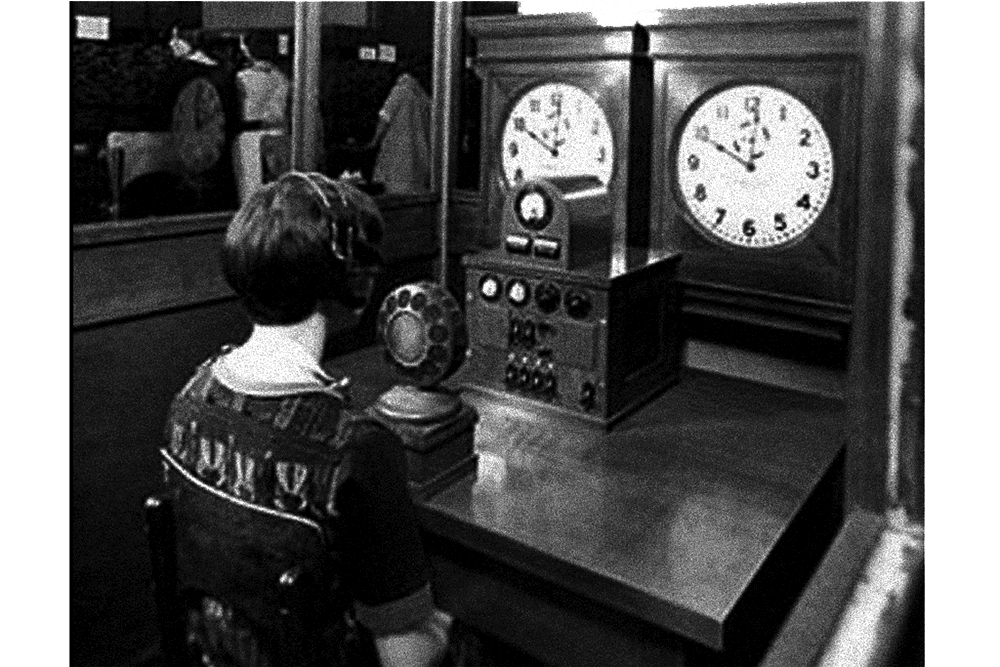 Of course what you hear live when you call the number above depends on exactly when you call. The voice, well that’s not so live. Simmons spoke the clock only from 1963 until 1985 and this service is a software simulation run by enthusiasts at telephonesuk.co.uk. Live, recorded, or programmed, a speaking clock is clearly an anachronism. But, it also provides a crisp model for thinking around something quite contemporary: the interface.

Jane Cain: At the third stroke it will be 8:57 precisely.

Pat Simmons: At the third stroke it will be 7:02 and forty-seconds.

Man’s voice: At the third stroke the time sponsored by Accurist will be 10:52 and 10 seconds.

Each has a particular quality and it’s easy enough to imagine those voices as the personality, or even the design, of this interface. Call the speaking clock and you’re interacting with a front end, a “user experience”—you’re given a simple friendly face for a complex process which remains hidden.

Whatever lies between is called interface. Whatever allows us to link to different elements, to reconcile them, to put them into communication.

That definition was offered in 1987 by Italian critic Giancarlo Barbacetto in his introduction to Design Interface. The book chronicled the Olivetti Typewriter Corporation’s early attempts at designing user controls for photocopiers, computers, typewriters, and calculators. Barbacetto places this design task in a broad cultural and temporal context. Appearing opposite his introduction is a reproduction of the Rosetta Stone, offered up as a kind of original, ur-interface—a shared surface which facilitates communication between otherwise irreconcilable languages and cultures. The Rosetta Stone [↙] records three different languages all relaying the same message. The recovery of this “shared surface” in 1799 allowed the deciphering of Egyptian hieroglyphs. 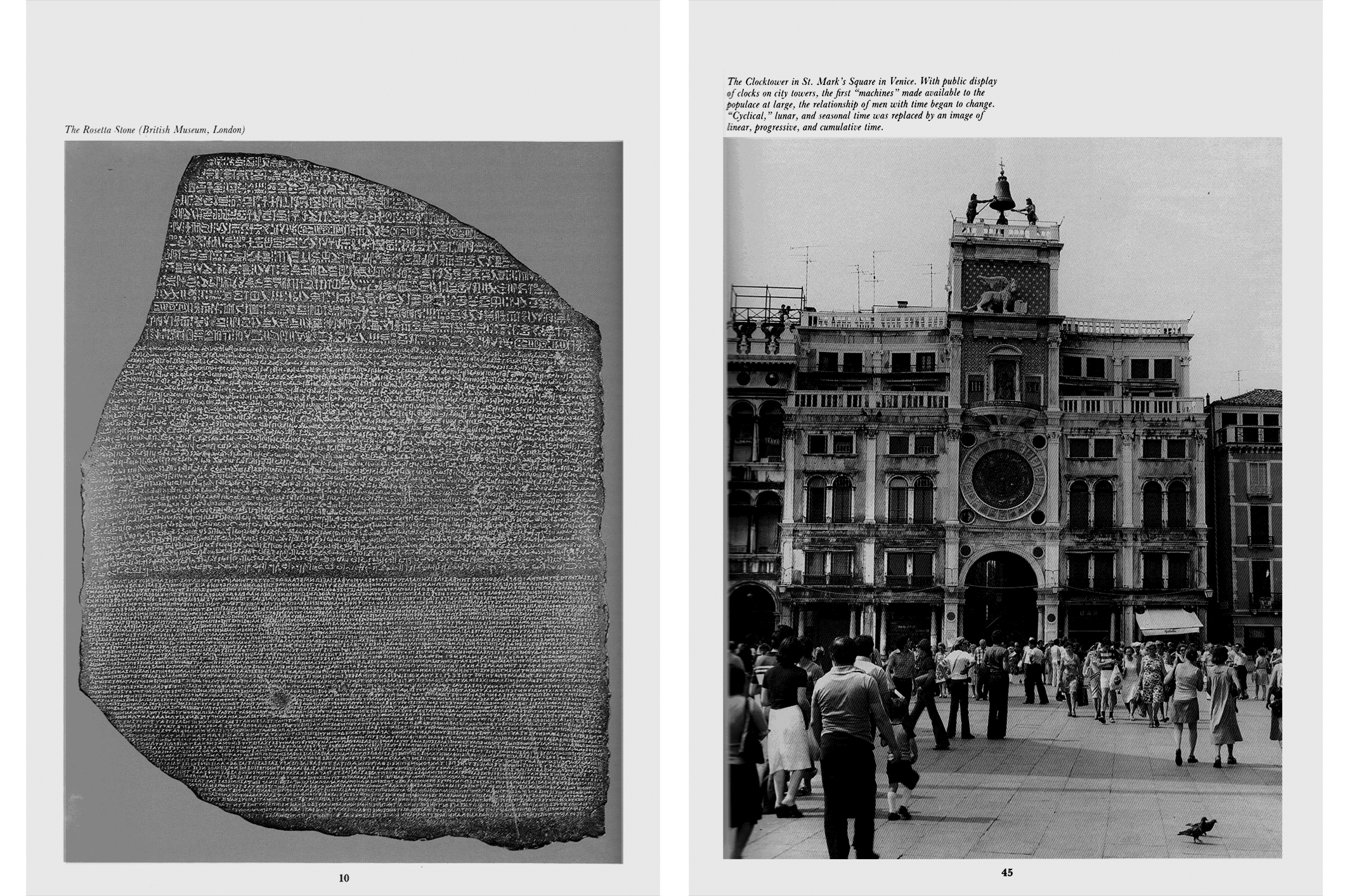 Barbacetto continues from the Rosetta Stone to an impossibly broad scoping of the concept of interface and lands on this, a public clocktower in the Piazza San Marco in Venice [↗]. It’s the first public clock and it’s set at the center of a merchant city, where shared time would have significant consequences for shipping and commerce. He goes on,

An extremely powerful and everyday filter is the clock. The first machine made available to all from high atop a tower ready to interface humans and time. The clock tore humans away from lived time marked by natural rhythms and by the duties of seasonal social labor and delivered into the power of measured time, objective and abstract. The work time of urban merchants, the interest time of the money lender, the factory time of industry. First the bells of the city clocktower, later the mill siren, erased cyclical time that moved, the rhythm of the seasonal return, of a certain kind of game, the ripening of a plant, the dependable rising of the sun. Cyclical time was a great exorcism of death—the moon that returns is the first dead man returning, repetition is the life of the world, history is nothing but the reiteration of a single original event; time is Kronos, the great primordial judge.

After the arrival of the clock all that became a memory and a myth. Time became linear, homogenous, empty, irreversible, cumulative, oriented towards a goal. Even modern mechanical thought prefers rectilinear motion to circular motion. Clocks mark the separation between work time (the value time of production), and free time, but today even the physicality of the chimes of the clocktower is obscured by the digital information time, the absolute acceleration of the discontinuity in the contemporaneity of computer time.

Olivetti’s first large computer (built in 1959) was named the Elea, after the colony in Magna Graecia where, in the fifth century B.C. the school of philosophy of Parmenides and Zeno was born. “Elea computer”—the name itself is like saying mathematical rationality and philosophical discourse, algorithm and hermeneutics.
(“Algorithm and hermeneutics” or in other words, a definite pattern and how things get their meanings.)
Continues in class ...
February 2, 2021
At the third stroke, the time will be ...